skip to main | skip to sidebar

Night of songs and friends

The rich, raspy resonance like that of Janis Joplin accompanies the wit of Nancy Rost as patrons sip wine at the ZuZu Cafe Saturday evening.

"Shamu, I do feel like a fish out of water. Shamu, I feel for you, but what can we do," sings Rost as she performs her song sympathizing with the unnatural pressures on captive killer whales, getting the idea from airplanes painted like them.

"Communication should happen in murmurs, not all this high-pitched chatter. There are too many words, and not enough that matters. But you were in the biz so long, you know the damn show must go on."

The song was written as Rost participated in February Album Writing Month, FAWM, in which musicians write 14 songs in 28 days. Described as the love child of Tom Lehrer and Tom Waits (says KnowYourMusic.com), Rost has been thriving in the Madison music scene since getting connected with songwriters at near east side open mics.

Below, Rost preforms her song, "Exile on State Street" at her ZuZu gig Saturday.

Among other crisp experiments in imagination, the piano, and perception are "I fell into a giant brain" and "Beethoven's Howlingly Melodious New Bass Guitar 'n' Strangle Disco (III)." The former was partially inspired by her cat pressing the jazz key on her synthesizer, the latter is an example of new musical genre "strangle disco."

While Rost plays, the audience snickers with her as she laughs her way through (un)reality. But given the sick nature of reality, Rost provides the best medicine.

Rost's refreshing brand of irony and satire can stretch to the serious as well. Her song "Welcome to Boscobel" touches on the promises and plans gone wrong at the Supermax Correctional Facility built there.

"...the possible rattle of chains and the rumble of hundreds of hearts that pound, you can hear if you keep your ear to the ground," she sings in the song, which was included in an anthology of the Madison Songwriter's Guild. 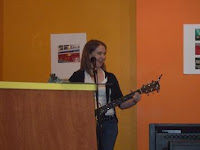 "Honey, you know that I love you... But you know that I can't be a single mom that's still in high school," sings Mortland in her song "Astoria Park," about the pressures of high school girls from boys, parents, peers and the insanity around her. The angst inherent in the song seems much like the punk-infused vocals of Karen O from the Yeah Yeah Yeahs.

Both ladies give terrific performances that give the audience a look at the world, then subsequently help them laugh at it.

For more on Kitty Mortland, click here.
Posted by B. Broeren at 11:18 PM

Good to see your keeping up with the friends from the Wil-mar. Someday you'll have to blog about songs you've written. Or maybe you could come up with a fake name while you right your songs, and then blog about how good they are, kinda like the CEO of Whole Foods telling everyone how great his company was.

Yeah, I read about that. John Mackey is a chump. However, Mackey had an interesting strategy if he could've pulled it off.

Stupid diletantes, I get most of my food from COPPS. Though I always make sure to buy the unpasteurized, organic, soybean milk-product for my tofu flakes.

By the way, I think that you are my only regular reader. I actually appreciate that. 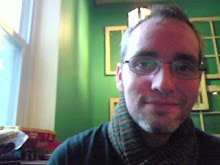 B. Broeren
A Midwest-based freelance journalist and commentator. Though does go outside now and then...